The United Arab Emirates, and Dubai in particular has become a powerful economic player not just in the region, but globally, owing to the drastic structural changes that took place during the last three decades.

Today, corporations, businesses, and investors alike, scramble to introduce their brands and capital to the region, and look to expand across the country if they have already created a formidable presence there.

Since the bureaucracy in the country uses Arabic as an official language, foreigners may find it slightly difficult coming to terms with not only the inner workings of the government, but also local customs and tradition.

This is alleviated by the fact that most of the civil regulation and commercial law takes its influence from western legal heritage, and that there are several organizations based in the city of Dubai, that assist in the process of company formation in Dubai.

Structurally, the ways to set up a company in the city fall into three main categories; commercial entities formed in the mainland, businesses situated in the free zones, and offshore elements.

Steps in The Setup Process

Apart from deciding which type of the three major categories you’re going for, there are several options available to you regarding incorporation.

Usually, the entire documentation process will be carried out by your advisers, and your attendance will only be needed when it is essential for the owner to be present.

After the documentation stage is complete, an application will be sent to the authorities, part of which is crafting your company’s business name.

It is here that the fees will be ascertained according to the type of company you are setting up, and the mode of incorporation.

When the fees have been paid, a certificate is going to be generated.

Your corporate services company is going to prove to be crucial in the process of opening a corporate account.

While advisers are going to help, banks can still decide to make an adverse decision, which is where the reputation and history of the company you choose is going to play a role.

It is a legal requirement for the owner to meet a representative of the bank during this time.

At this stage, you will also be able to open personal accounts for yourself and family, and depending on the bank, you are going to gain access to online transactions, ATM cards, multiple currencies, and letters of credit.

In most cases, a corporate services company is going to take care of all the processing and documentation needs.

For foreigners who set up businesses in the UAE, the immigration stage will pertain to the work permits, and the residency application.

The residency application can be filed after the final incorporation, part of which is a mandatory medical exam, usually taking up five days.

After the visa is provided, it is going to be entered into your passport, and an Emirates ID will be generated for you.

Once the residence visa has been approved, there is the simple process of entering it into your passport, while obtaining your emirates identification card.

The main purpose of these entities is to do business in the main limits of the city and carry out trading activity. As such, a bulk of the focus is going to be on selling to the local population.

LLC company formation in Dubai takes place according to the rules stipulated by the Companies Law, and each stakeholder is liable only to the extent of their stake in the entity, the content of which is crystallized in the memorandum of agreement.

It is in such a setup the well-known requirement of 51% ownership on the part of a UAE national applies. This does not render the rule oppressive, because the legislation also makes room for binding provisions that protect the shares of foreigners therein.

Business Formation In The Free Zones 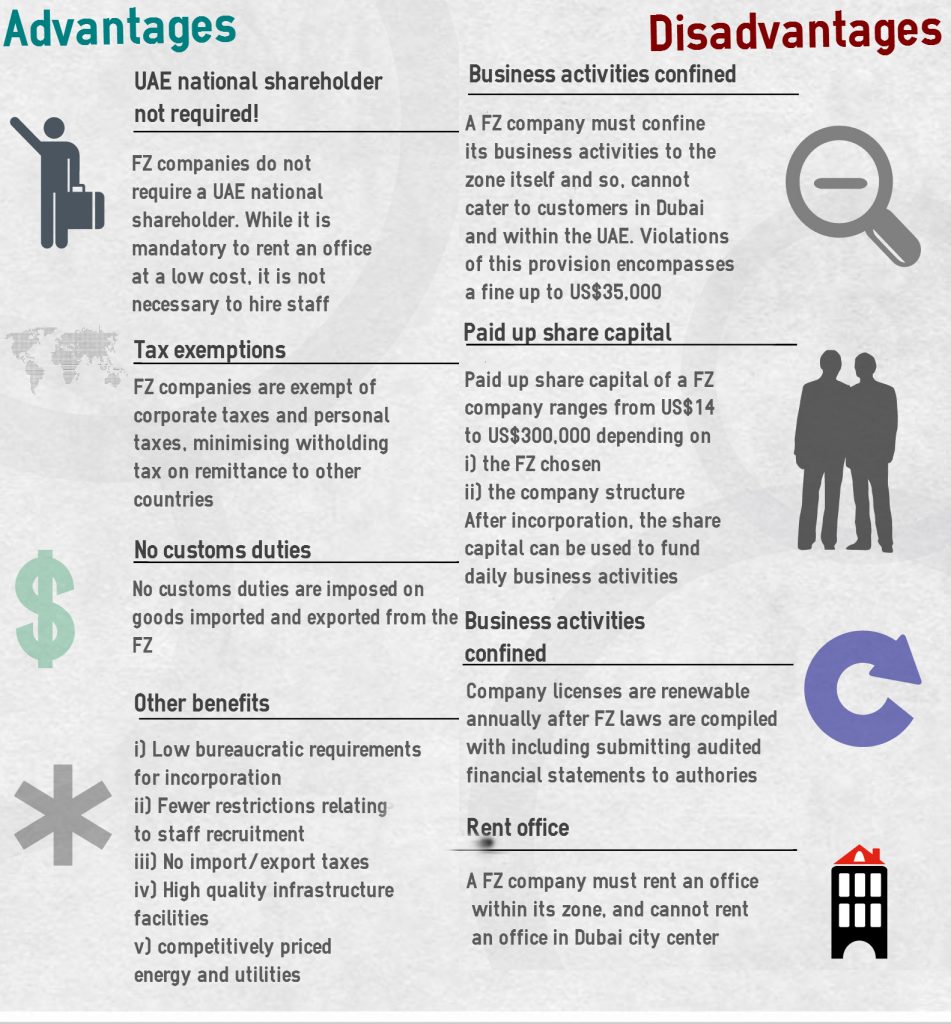 The remaining two major setups are both typically formed in the local free zones.

The first option is a free zone company, the notable edge of which is in the ability of the foreign owner to retain full ownership, without the need for a local sponsor.

The many stellar corporate advantages, such as no tax, the ability to give the company international reach, the allowance to own property, and instant liquidation all apply to free zone business formation in Dubai.

The second one is an offshore entity, which is often set up by foreign businesses looking to minimize the applicability of tax, through mirror enterprises.

There are several benefits that are accompanied with basic but obligatory caveats. Such companies need not have an actual office in the UAE, or exhibit minimum capital levels.

On the other hand, they will be required to register a Director, generate a fiscal document audited by a company endorsed by free zone authorities, and retain financial details.

The Jebel Ali Free Zone in Dubai is a widely known area in the city for foreign companies and investors.

In addition, the government policies for free zones and the JAFZA administration deliver several facilities and trade incentives.

Jafza’s location and popularity with foreign manufacturers has helped it record excellent growth in recent years, attracting several high-profile organizations from all over the world.

The region is home to over 6000 companies, including from the Middle East, Europe, South East Asia, and Africa.

The number of companies has grown over three times since 2000. A key attraction is the location between Dubai airport and the sea. The area also has ready access to a six-lane highway.

The Dubai Airport Free Zone (DAFZA) is a large contributor to the city economy, and was envisaged to boost investment activity.

There are many beneficial policies being implemented, including zero tax, full foreign ownership, and the freedom from currency limits.

The zone is home to over 1500 businesses from multiple companies in the next generation segment, some of which include aviation, IT, pharma, and those dealing in luxury goods.

A significant bulk of licensing work takes place here. The zone also hosts multiple government offices and departments, and the area is fully-stocked with all staple communication and maintenance facilities.

The Dubai Multi Commodities Centre (DMCC) was created by the government of Dubai to implement sophisticated infrastructure that could support the trade of commodities and precious items.

The zone hosts thousands of traders, including vendors dealing in other trading items.

The DMCC delivers several investment vehicles for products that rely on commodities, and also has safes and storage space for high-value items.

Currently, the center boasts a fully established space with eateries and recreation options, populating over 90,000 people.

The bulk of the trading value is taken up by pearls, diamonds, gold, and tea.

The area has climbed to international repute in recent years owing to the bullion label, and also provides transport facilities for the precious commodities, with high security.

The Dubai Silicon Oasis (DSO) is a relatively new commerce plus residence scheme that delivers a live and work inhabitation model.

The place is usually called a technology park, and the sophisticated facilities in place have supported the establishment of tech companies from around the world.